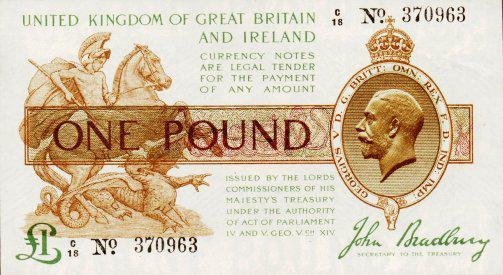 THE CHANCELLOR OF THE EXCHEQUER, ALONG WITH THE PRIME MINISTER, MUST IMMEDIATELY TRIGGER AN ELECTRONIC VERSION OF THE 1914 TREASURY-ISSUED BRADBURY POUND IN ORDER TO UNDERPIN AND PROTECT THE ENTIRE LAWFUL BRITISH ECONOMY FROM THE LIKELY INTERNATIONAL FINANCIAL AND ECONOMIC COLLAPSE DUE TO THE GLOBAL OUTBREAK OF CORONAVIRUS!

By Justin Walker of The New Chartist Movement (www.newchartistmovement.org.uk)

On Monday 9th March 2020, we saw the worst downturn in the global economy since 2008—indeed, some traders were saying it was as bad as the fall-out from 9/11 back in 2001. Since then, Prime Minister Boris, attempting to emulate his wartime hero Winston Churchill, has authorised a £330 billion-plus package to save the nation from any sort of financial Armageddon.

However, there are two problems with this ‘generous’ rescue package. Firstly, a sizeable percentage of it involves creating ‘easy-term’ loans for small and medium-sized businesses—in other words, your income stream has suddenly dried up, your company is facing imminent collapse, but don’t worry, the government will give you more debt to get you out of trouble! And, secondly, it will ultimately result in our government borrowing yet even more debt-laden ‘fresh air’ money from the financial crooks in the City of London—some believe it will be on a scale that was last seen during the Second World War.

Those of us who have been monitoring the private and utterly fraudulent financial system that strangles the world with unlawful debt, know that these globalist banksters can’t help themselves and have been seeking an opportunity to ‘re-set’ the global economy for their immediate advantage… just as they did in the financial collapse of 2008. It would appear that this Coronavirus ‘pandemic’ is now conveniently providing them with just such another opportunity to strike again.

The simple and undeniable fact is this: a sovereign nation that is drowning in a sea of unsustainable ‘debt’ is far more compliant to the will of this global financial system and the psychotic and globalist mind-set behind it, than a sovereign nation that is free from any sort of national debt and which, therefore, does not find itself caught up in the grasping tentacles of the Bank for International Settlements (BIS).

Based in Basel in Switzerland, this very little known—and completely unaccountable—private financial institution is the coordinating hub for sixty-two of the world’s central banks, including the Bank of England, the European Central Bank and the Federal Reserve itself. The BIS also oversees over 95% of the world’s money and is where the governors of these central banks receive their confidential instructions from the powerful banking dynasties such as the Morgan, Oppenheim, Lehman, Warburg, Rothschild and Rockefeller families.

The so-called ‘debt’ that the world is currently drowning in (apparently, the so-called Derivatives Debt Bubble hanging over the world is now fast approaching two quadrillion dollars) has been very largely arrived at by governments of sovereign nations borrowing debt-laden ‘money’ from the usury-practising private financial and banking sector—‘money’ that has been created completely out of thin air as debt and which is not backed up by gold or assets of any description. This is called fraud by most normal people and the entire ‘debt problem’ is only perceived as such by people who are very ignorant of how money is actually created and by whom. And, for dealing with the financial fall-out of Coronavirus, it is also the case of the British people not knowing their own history!

Back in August 1914, at the outbreak of the First World War, in order to avoid the imminent collapse of the private banks and the Bank of England itself, Parliament passed a Bill through Parliament in two days which authorised HM Treasury—not the Bank of England—to create, issue and control money that was debt-free and interest-free because it was based entirely on the wealth and labour potential (creativity) of the British nation. The high-street banks reopened within days and people who had planned to withdraw their savings in gold (Britain then being on the gold standard) were more than happy to accept these new Treasury notes created by HM Government and, contrary to the ‘wisdom’ of mainstream economists, there were no problems at all concerning inflation.

The fraudulent and debt-creating private banking system was saved from collapse but unfortunately the politicians in Parliament (who were, and still are, subservient to the wishes of the City of London) then went back to selling bonds and thereby unlawfully borrowing this debt-laden ‘money out of thin air’ from the private financial sector—a clearly criminal action on the part of our political class that resulted in the bankers being able to make an absolute killing out of the killing on the Western Front.  And it also meant that the National Debt went up—unlawfully—from £650 million in 1914 to £7,500 million in 1919.

The simple truth is this:  any sovereign nation in the world, through its treasury, can create, issue and control debt-free and interest-free money that is based entirely on that nation’s wealth and creativity. This way, all of a nation’s essential needs can be met without the requirement for a complex and invasive taxation system; and without being dependent upon the vagaries of the private and international money markets. And damaging and soul-destroying poverty and austerity need never happen again. A nation’s security, prosperity and indeed happiness can be secured forever by the use of this very simple, effective, proven and common sense measure of money creation (HM Treasury call it ‘M0 at 100%’ whilst money reformers call it ‘Sovereign National Credit’). And our elected servants in Parliament need never again go to the City of London and the private financial institutions to borrow money; nor ever again need their decision-making be affected by the machinations of the privately controlled Bank for International Settlements with its global central banking system of increasing debt strangulation.

So, the bottom line is this: as a new global financial collapse rolls into view, it is quite possible for the entire part of our nation’s lawful economy—that is pensions, workers, infrastructure, industry, share-holders and the value and stability of our money—to be immediately under-pinned and protected by the Chancellor of the Exchequer. He does this by simply declaring that HM Treasury will now immediately resort to M0 at 100%. He does this by simply restoring the fiscal arrangement of the 1914 Bradbury Pound both as physical cash (existing Bank of England bank notes can remain in use) and as electronic money.

In practical terms, this means drawing off debt-free and interest-free money that is based solely on our nation’s actual wealth. This is NOT fiat or debt-based ‘fresh air’ money that’s put out by the private financial institutions, especially when the central banks carry out their ‘Quantitative Easing’ helicopter money scam—it is based on something far, far more tangible. In 2018, according to the Office for National Statistics (ONS), our nation’s assets were worth in total £10.4 trillion. The UK’s human capital stock in 2018, again according to the ONS, is valued at £21.4 trillion. This means that the total wealth of Britain is currently well over £30 trillion. So, it would be quite in order to immediately draw around £1 trillion from this figure (as debt-free and interest-free money) in order to ride out the Coronavirus storm and to then steady the ship of state for a future without the debt-creating crooks running the world’s economy.

Such a common sense and immediate action would mean that the British economy would have the immediate liquidity needed to become stable and completely impervious to the whims of the international and privately controlled money markets, the central banking system and the criminal mind-set behind it. And all of the British people will enjoy the rest of their lives living in a country that’s free from having an invasive and complex direct taxation system—a country that enjoys continuous prosperity and real happiness rather than experiencing the misery, unemployment and foodbanks of austerity.

Just look at what could be done with the 2020 Bradbury Pound—the NHS would have all the money it needs to provide a first-class service; the vulnerable and the elderly in our society would have all the social care they need; the Armed Services would have all the personnel, equipment and resources that they require to effectively defend our nation’s shores and sovereignty; the police would have the ability to restore proper community policing to take crime off the streets; strategic industries would be protected from foreign take-overs; and the country would have the resources needed to mitigate against the effects of climate change such as creating proper flood defences and protecting communities from coastal erosion. And all student debts would be written off without delay whilst all future education would be free at source.

Not a bad list to show what can be done by simply harnessing the truth, common sense and an historical precedent that worked brilliantly! And, contrary to what the system-serving economists will try and tell you, there is absolutely no danger of run-away inflation as the private currency speculators that trigger ‘panics’ (such as what happened to the Weimar Republic in the 1920s) would play no further part in the future financial stability of our country. And just one other thing, and probably the most important of all, every government of every country in the world will follow suit—the ordinary people will demand it! Poverty, austerity and debt misery would be confined to the history books forever!

But the only way this has any chance of happening is if people overcome their ignorance and apathy about money creation and money supply and urgently email this article to their MP and to everyone else they know (you can find it here on www.newchartistmovement.org.uk/articles/bradbury-pound-sovereign-debt). It’s only our collective ignorance and apathy that allows the present criminal, usury-based and debt-creating money system to prevail. The bankers and financiers are scared stiff that this simple and proven solution will soon become common knowledge. So, it’s up to you—please help to make this article go viral. We must get this essential information out there into the public arena. Thank you.

For more information about the Bradbury Pound, please read this: Bankers, Bradburys, Carnage And Slaughter On The Western Front.

Bradbury Pound Coronavirus loans
Facts about Covid-19
How the Hell Did We Get Here?
The Bankers' Contempt for Humanity